These days I start off my posts by saying that I am not able to update this site often. I do a new shoot or project every week with many irons in the fire. And of course creating art is a priority in my personal time. We do a decent job of keeping the After-Death Plan website and related social media updated…at the best of times.

But I want to post about a couple of important things, my recent artist-in-residency at the Arts & College Preparatory Academy (ACPA) and also the wonderful Professional Development grant awarded to me by the Greater Columbus Arts Council.

First, the artist-in-residency: The grant was written by Ben Shinaberry at ACPA, the Arts & College Preparatory Academy, here in Columbus Ohio and awarded by the Ohio Arts Council. There is an excellent program at ACPA called Bandlab, taught by Noah Demand, where students form groups that study music, write songs, and practice consistently. The grant was to bring in an engineer/recording artist to record a song with each of the eight Bandlab bands comprised of 40 students.

We started with recording preparation sessions where I talked with students about what to expect during their time with me. Aided by some Song Description sheets I’d sent them to fill out, I met the students, gave them an overview of session protocol and the hardware/software we’d use, and talked about what to expect and how to get ready for their recording session. This as aided by informative visuals: 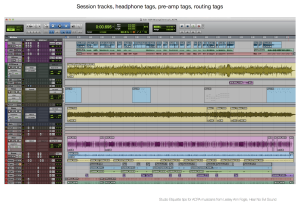 And, at times, snarky visuals such as this one on sensitive studio mics: 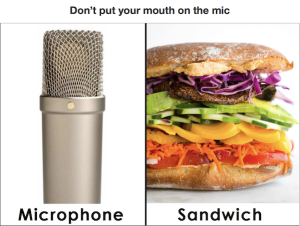 I spent some time getting things organized: labeling snakes, setting up equipment, updating drivers, tweaking the Pro Tools session template, etc. We were set to go for the two weeks of tracking with a different band each day. 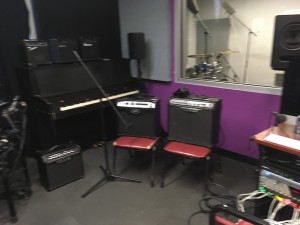 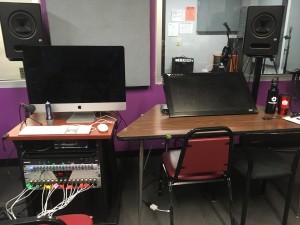 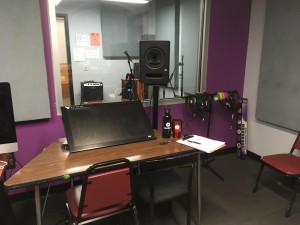 During the prep session we’d made a list of students interested in engineering whether as a potential career or just to further their own music. Those students switched off in the engineer’s chair while I talked them through running the session. Each player connected their own cabling which was color-coded and corresponded to the patch bays, pre-amps, and session inputs; and worked with each other while we went through the lengthier process of dialing in everyone’s tone and levels. Being a whole new experience for most, we typically did quite a few takes before finding our working scaffold/take with the most solid drum foundation. Then, generally, we overdubbed or punched in any parts of instruments that needed work. From there we generally overdubbed the vocals to eliminate all of the drum and amp bleed from the original tracking. And from there we moved on to vocal mults and harmonies.

This was a hands on, engaging experience. Different groups spent their time in different areas. One group built a blanket fort around the drum set to calm some of the room reflection, another lined the kick drum with carpet tiles, another spent the bulk of the tracking day re-arranging their song and making it stronger with better chord progressions, another focused on building both the chorus and hooks with instrumental and vocal overdubs, and another spent a large portion of time working on group vocals. One person declared they’d played the wrong chords at part of a song for months and even live because they could never hear themselves and everyone else simultaneously. And most of the singers had not used a condenser mic and were very interested in studio mic technique. I could go on and on here but the basic premise is that we came to these conclusions through discussion and the students learned a lot about technique and arrangement through this experience where every note was heard and permanently captured.

That was about the entire school day for most of the groups though some of the groups were able to fit in some edit time after a crash course on editing. Honestly, we could easily have spent a week on concepts alone so these were action-packed days. And these Bandlab teens were all very talented and into recording the songs they had written. 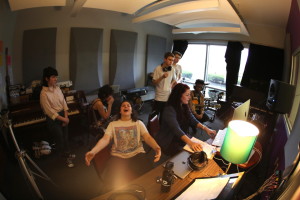 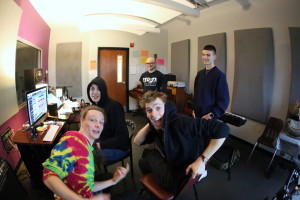 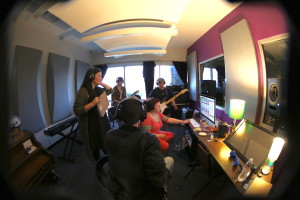 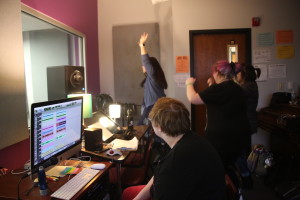 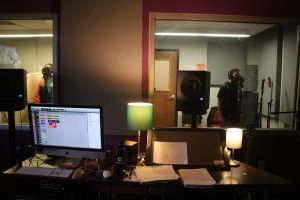 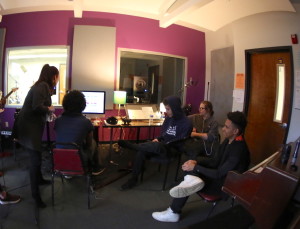 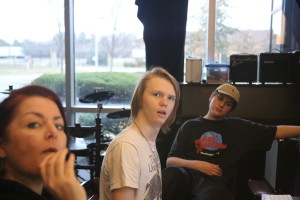 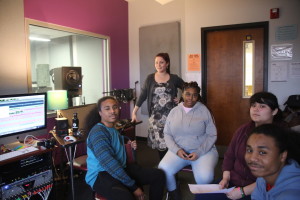 We then moved on to mixing concepts with each of the eight groups. After rearranging the space a bit to get the monitors at ear level, I met with each group to discuss mixing concepts. Working wth their basic plug-in bundle, I imported some fx busses into their template so we could quickly activate any needed effects. We started with basic editing concepts then mostly started honing in on drum sounds individually and as a whole before incorporating the bass till the entire rhythm section gelled nicely. We went over the concepts of the frequency spectrum and where each person’s instrument sits in that spectrum in order to touch on EQ, panning, compression, delay, and the types of reverb. We touched on many mix concepts and though it takes time to train one’s ears, I hope this gave everyone the encouragement to keep experimenting with mixing. 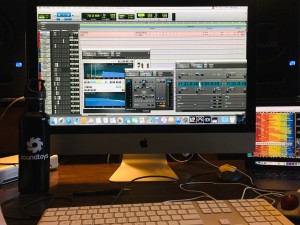 Then we moved on to finding placement and tone for the guitars and keys to sit in the mix before dressing up the vocal.

That about summarizes the experience. Anyone who mixes knows you can work for weeks on an individual track while we created these recordings in a short amount of time. That said, the songs sound great and really don’t need to be tweaked further because there is no doubt that the next series of recordings will start st a level where these recording leave off…you know what I mean? The level of talent these young ones possess is eye-opening and I’m glad they were able to hear just how good their songs can sound in a controlled environment. I look forward to hearing the tracks assembled into an ACPA album! I’ll post info here when it’s released. It may not be mastered so crank it!

I might also add that I wanted to take this opportunity to show female visibility to potential aspiring engineers. It took over a decade for me to see another woman working in post-production audio in the relatively large arena of Chicago. The number of women in the industry has apparently risen to a whopping 5%. I have some insight into why young women might be intimidated by this field and want to do my part in empowering future generations in going after their dreams. The inner voice is genderless. 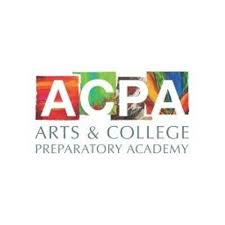